John was born and raised in Hemingford by Darrel and Janice Annen with his sister Lori. After High school he went to Western Nebraska Community Collage for a Paramedic. He worked for Regional West Medical Center and for Valley Ambulance for a short time but came back to Hemingford to work for the Hemingford Telephone Company.

John married his wife, Carolyn, in 1989, they have one daughter, Melissa, and three grandchildren: Kinzee, Madison and Payton.

In John’s spare time he enjoys Hunting, target shooting, snowmobiling and spending time with the grandkids.

John is inspired when people try to make our community a better place to live.

John was first approached by several board members to run. This time, he was seeing the town going in a direction that I didn’t feel it was positive and felt that I could make a difference.

When asked who his hero was he said he had two. Jonny Unites and Bret Rasmussen.

John was asked about a quirky fact, he responded “When I was young, I had a pitch-fork go through my left foot. There is a scar on the top and bottom of my foot. I didn’t even notice that I was bleeding until after I finished chores.”

John’s interesting qualities are: a perfectionist, introvert and passionate about what he believes in. Lynda was born to Bill and Iola Trickler, she was born in Alliance, the second child out of six, the family lived in Sidney until she was 11, when they then moved to California. She moved back to Hemingford when she was 28 because she loved this way of life.

Lynda has been married to Ron for 20 years, they are now both retired, and have two fur babies, Daisie and Naudia. They travel with them when they go on their travel adventures.

Lynda is proud that she ran her own successful business from 2009 to 2014. “No mater what life has thrown at me, I’ve landed on my feet”

Lynda likes to quilt and travel in her spare time, she does spend time at Pat’s Creative, helping out cutting fabric and other fun quilting projects.

Honesty inspires Lynda, it’s who she is.

Lynda wanted to be a council member because she felt the town needed new people on the council and she loves this town, and the people who live here. She is proud to call Hemingford her home.

Her hero is her father, Bill, he taught her to be a strong woman. Even though he was going to school, working two jobs he always made time for her, and her siblings individually. One quote he always said was, that she remembers fondly is “You can do anything you choose in life; the hardest thing is choosing.”

Lynda was asked what a quirky fact was, her response “my sense of humor, and I might be stubborn.”

Lynda has several interesting facts about her, she was a successful hair dresser for 45 years, she is a self-starter and “what you see, is what you get; I don’t play games.” Rick was born to Rudy and Elsie Wacker, in Scottsbluff, he was raised with three brothers and three sisters, was the “middle child as much as you can with that many of us”.   He graduated from Hemingford, in 1970, he was drafted in 1972, and served 3 years in the Army.   He returned home and started to work for the railroad in 1975. He retired in 2014, he worked for 39 years.

Rick has lived in Hemingford since 1991, and married Carol Ruffing in 1991 too. He has five children, four girls and one son. Three girls from the first marriage and one from his current. He has six grandchildren.

Rick feels that his major achievement is raising 4 girls. He is also his own carpenter, machinic and electrician, and that he survived 39 years on the Railroad.

Rick loves to be outside, and all kinds of different sports, motorcycles, fishing, boating ect.

He is inspired by people who have every reason to be “down and out” but are not. Those people who have disabilities that do not let that define who they are as a person.

Rick wanted to be a council member because he likes to be busy, and have lived around Hemingford most of his live. He really wants to make a difference and give back to the community.

Rick has several heroes, first his parents, they were very hard workers.   His daughter, Michelle, she has risen above a physical handicap and has made a good life for herself.

Rick was asked what a quirky fact was, his response was “I always have to have a hat on, you almost never see me without one.   I’m easy going. And I enjoy creating stain glass art.”

Some interesting fact about Rick is that he power lifted and competed until he was 45 years old. His max are: Bench: 340, Deadlift: 585, and Squat: 480. Another interesting fact, is his first hair cut by someone other than his father was when he went to the Army at 21, and his dad was an Army barber. “Dad cut everyone’s hair, even my mom and my sisters”. One more interesting fact is that Rick enjoys an eclectic range of music, from classical to western, but not rap he says 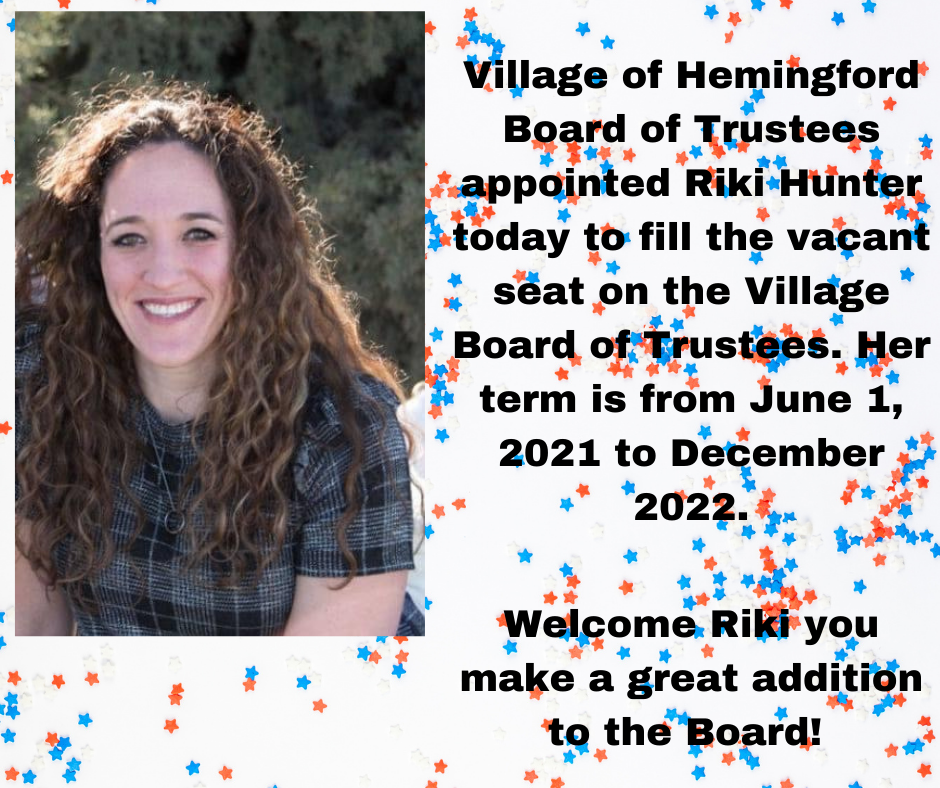 Residential Sidewalk Improvement Grant is available to residents of the Village of Hemingford on a first come first serve basis. There will be five grants up to $500. Grants will not be approved until the area to be improved is inspected by the Village – Public Works Department. All applications needs to be turned into the the Village office by August 31st 2022. Here is a link with a copy of the Sidewalk Grant, or applications can be picked up at the Village office during business hours.